About 50 racers came out for the US/East edition of the Tuesday Night Worlds training race. This week drafting was a little tricky as riders sometimes got stuck behind the riders they were drafting, but the racers soldiered on anyway to contest some hard-fought battles.

In Group A, three riders managed to get to the top of Governor St. together on the final lap: G. Staley, J. Brazeal and B. Boniface. Boniface led out the climb with Staley and Brazeal seemingly content to sit on his wheel. At the corner onto the Broad St. final straight, however, Staley launched a blistering attack that immediately opened up a significant gap. Brazeal attempted to follow, but was unable to close the distance to Staley, giving Staley the win with Brazeal second and Boniface third.

Three Group B riders made it onto the final stretch to contest the sprint. A. Gagnon led out from 200m, with S. Oxenham jumping on his wheel, but C. MacLeod was not able to catch onto the draft. Gagnon's jump was not enough to shake Oxenham, though, who ramped up his power and managed to come by for a convincing win. Gagnon rolled across two seconds later, with MacLeod taking third.

In Group C, G. Thompson managed to come off the Governor St. climb with a significant lead. He held this to the line, with L. Reynolds and R. Clark following at about 30 second intervals.

Group D
Posted by cwiedmann at 9:57 PM No comments: 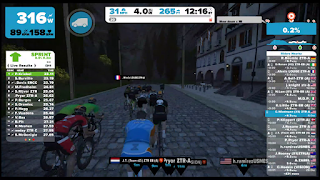 A huge field of at least 75 racers showed up to this ZTR. Unfortunately some of the packs were not as compact as they could have been during the neutral roll-out, but we'll give it another try next week and hopefully it'll get better. Many thanks to J. Mora and S. C. (Team dZi) for helping out with the staggered start. Also note that due to the number of crashes reported during the race this week, I've placed everyone who looked like they were completing the race in the results, even if the distance covered was less than the full distance.

Cassie Baldi (Team dZi) showed her strength by riding with the C group and finishing in what would have been second place. As the only finisher in the women's race she was awarded that win instead.

The two Group A names that immediately jumped out to anyone following this race series were J. T. (Team dZi) and T. Bern Hansen. The pace started out very high. For a moment it appeared that J. T. might be in trouble as he was gapped off the back of the pack towards the end of the first lap, but he managed to bridge back to the group on the climb. Eventually a strong group of five riders established itself at the front: Bern Hansen, J. T., F. Garcia, P. Pryor and K. Little. Bern Hansen tried several times to get off the front, but did not manage to get away from J. T. The high pace in the flats seemed to affect J. T. more than Hansen, and in the finale he was gapped slightly in the approach to the finish, allowing Bern Hansen to take the win over Garcia, who was relegated to third behind J. T. for using a power up in the last lap.

S. White outclassed the rest of the B field, catching onto an A chase group. E. Nekkers won the B group field sprint with S. Vingerhoets (TK.be) taking third.

A. Nascimento soloed to the C group win with N. Wisisperger and B. Afonso following in second and third.

The D group seemed to be decimated by crashes, but presuming that all riders that came back from crashes had actually completed the full distance, C. Flores took the win over C. Pritchard, with D. McShoe rounding out the podium.


Group A
** relegated to third for gaining advantage on the last lap using a power-up.
Group B
Group C
Group D
Posted by cwiedmann at 9:29 PM 8 comments:

More than 50 riders showed up to contest the US/East edition of the Zwift Tuesday Night Worlds training race. This week we were back in Richmond doing a 3 lap race (the first quarter lap neutral). Thanks again to M. Hoogerland for leading the Group C&D neutral in this staggered start.

C. Swanson was the only woman finisher, holding her own in the C group and finishing the race segment with more than a 33 km/h average.

A group of 3 made it to the last climb of Governor Street together. B. Boniface attacked early but committed the faux pas of using a powerup on the climb. G. Staley and A. Baron managed to close the gap by the turn onto the finishing straight. Boniface immediately upped the pace, opening a gap to Baron and Staley. Staley launched a long sprint at about 300m to go and was able come around Boniface with Baron trailing a second behind. Due to his powerup usage, Boniface was relegated to third in the final results.

C. Ridgick soloed in to victory in the B group. He was followed a minute later by J. Wilson, with M. Lavoie a further 23 seconds back.

T. Schneider took the Group C win. D. McKeon followed some 41 seconds back, with J. Snyder third a little more than a minute further back.

R. McCulloch toughed out the late-night ride and was the only D group finisher, thus getting to stand on the top step of the podium.