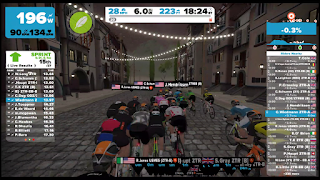 More than 50 racers showed up to the UK/Europe region Thursday Night Training Race on Zwift. The race course this time was the reverse Watopia loop. Groups A and B did 5 laps and Groups C and D did 4 laps. Thank you very much Jacob Dodsworth for volunteering to lead out the neutral section for the C and D groups.

For a moment it appeared like J. T. (Team dZi) might be tested as Norwegian phenom T. Bern Hansen joined the race. Unfortunately Bern Hansen developed cramps and decided not to contest the finish so we will have to wait until another race to see who would win a head to head contest. J. T. (Team dZi) got the jump on the rest of the A group with a strong attack on the KOM climb and managed to pull out a 20 second lead by the finish line. F. Coppex (X1) rolled across in second followed shortly thereafter by K. Little.

D. Ronan managed to hang onto the A group for three laps on his way to winning the Group B race. S. Gray and ICON Champion (QCW) followed more than 90 seconds back for second and third, respectively. The main Group B peloton was a further minute back, with E Nekkers winning a close field sprint over C Dog and R. Jones (USMES).

A group of 6 riders tore up the course in the C race, managing to average over 40 km/h over the four lap race distance. In the end S. White* managed to gap the group and rolled over the finish line four seconds ahead of J. Thompson who won the group sprint. G. Z. (Team dZi) was third.

P. Cambell was the only entrant in the D group today and so got to take the trophy after finishing the four laps at a respectable 34.7 km/h average.